Thanks to Dr. Diane Holloway, a retired Dallas psychologist, I have one of Edith's dessert recipes to share with you. 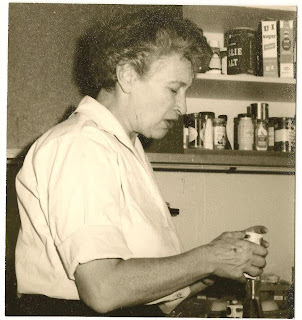 Melt the shortening in a large metal cake pan or skillet set over medium heat. Plump the raisins for 10 minutes in boiling water and then drain them.

Start heating the oven at 400 degrees. Mix the flour and water in a large bowl. In a separate small bowl add water to egg yolks and combine well. Pour the egg mixture into the dry ingredients, mixing well with a whisk.

Beat egg whites stiff, then fold them gently into the liquid mixture. Pour into the heated pan with the fat. Remove from heat at once and place in the oven. Bake until golden brown (8-10 minutes); then put back on stove top.

Serve with raspberry syrup or prune jam. To make prune jam for zwetschkenroster, cook dried prunes with water and sugar in a saucepan until it becomes a not so thick jam. Then add cinnamon and cloves to use as a topping on this trifle. Serves 8.